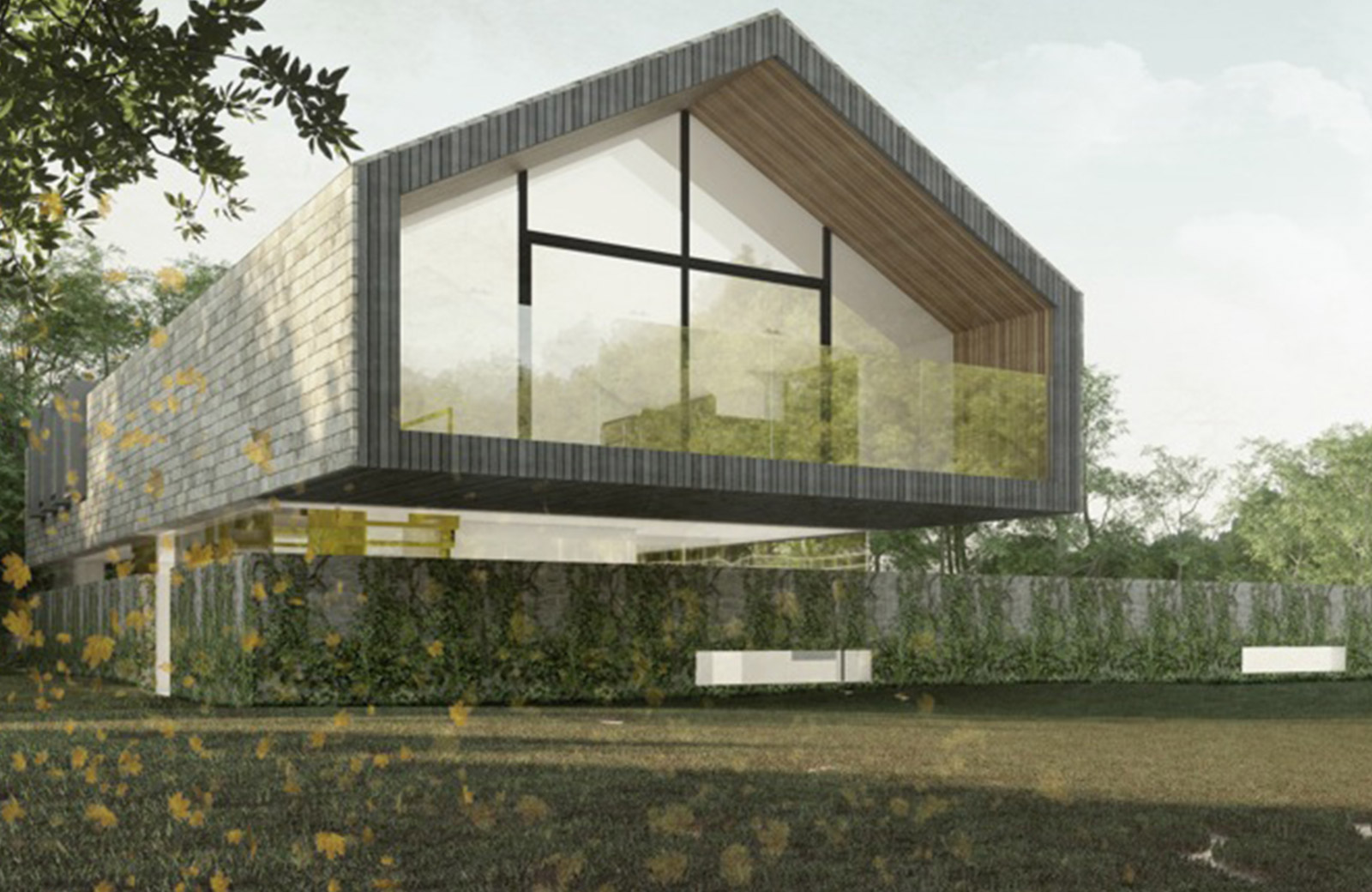 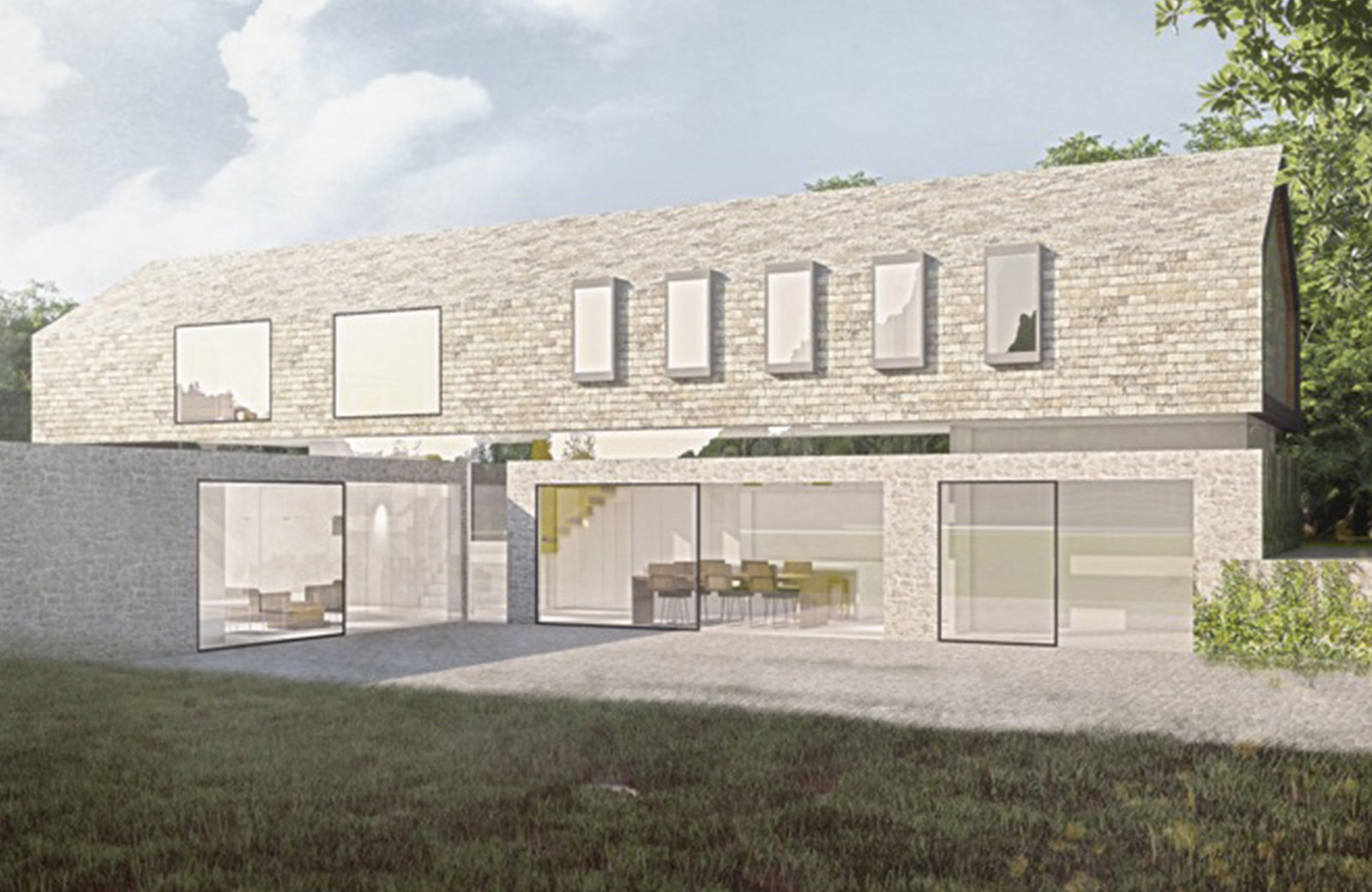 The design of the building looks to provide a contemporary reinterpretation of traditional Cotswold Architecture and draws heavily on the shapes and materiality of the local area. The building is articulated as two elements; a semi sunken base and an extruded gable end which will appear to float above the lower level.

The base is intended to be clad in Cotswold Stone and will be used as a surface for climbing plants to establish themselves. Over time the lower levels will become gradually covered in planting and bed down into the site.

The upper floor is separated by the lower floor by a clerestory window. The design is a simple form, which is generated by a traditional gable end.

The upper storey will be clad in Cotswold Stone tiles with the traditional technique of increasing tile size towards the ground being used. Openings through the upper level are arranged as a series of vertical apertures which reference the traditional arrangement of stone windows.

The entire floor is cantilevered at one end to emphasise the sense of the floating upper level which draws attention to the apparent weight and solidity suggested by the materials.

A brick and glass linking structure ties the living areas together and lets light flood in to this west London townhouse.

Warm Materials and use of light used in Chiswick Side Extension.

A radical split level extension doubles the size of the north London property.

Sensitive alterations to this country property were carried out in the third project for this client.

A comprehensive transformation of a run down semi detached dwelling including an environmentally friendly fresh air ventilation system.

The dramatic extension over two floors replaces a freezing conservatory and transforms the property.

A beautiful city centre loft space was stripped right back and remodelled using the buildings existing features and adding a stunning roof terrace.

The introduction of a curved double height wall was used to transform this 60's bungalow.

A modest bungalow and garage were upgraded and combined to form a beautiful family country home in Oxfordshire.

A well designed side extension gained planning next to a significant church.

An ugly eighties property was extended and given a facelift with a modest budget.

Housed in an old theatre building. By using existing volumes and reorientation the main worship space into a beautiful new space was created with up to date services and a solar farm.

A proposal for a complete new build to replace an exiting building used brick and cantilevers to exploit the site.

An extensive plot in North London used the gradient to create a sweeping house half buried in the hill side.

Brick and oak frame are used to create simple but handsome new houses on a plot near Basingstoke.

A green oak framed barn and unique fully glazed pool are the main features of this spa ban to an Oxfordshire house.

Brick, timber and the neighbouring building lines are used to generate a striking façade for 32 flats.

A modern double fronted townhouse with a louvred front to let in light and provide privacy.

A contextual brick façade conceals a highly glazed modernist building to the rear.

Five flats are contained within this timber and glass terraced structure with landscaped gardens.

New family home informed by the local buildings and reinterpreted in a contemporary idiom.

The former dairy buildings are used as a starting point for the design of this eco house in the Surrey Hills.

A house for a sensitive site in the Cotswold's which is sunk into the ground and used rural forms.

A series of new buildings for the school which used a system of building which is low cost and quick to build.

A sensitive back garden site prompted a semi underground house that worked with the site levels.

A classic car workshop and museum drawing on factory roofs and transparent materials.

An office to residential conversion which includes a new planted wall clad pavilion to the top floor.

A dramatic beach side site carved out of the rock with a rugged modern house to blend into the cliffs.

Nine new dwellings on a redundant garden centre site are clad in two types of timber.

A proposal for a mixed use corner building in south west London.

Planning was gained to renovate and extend this 60s office building in Hemel Hempstead.